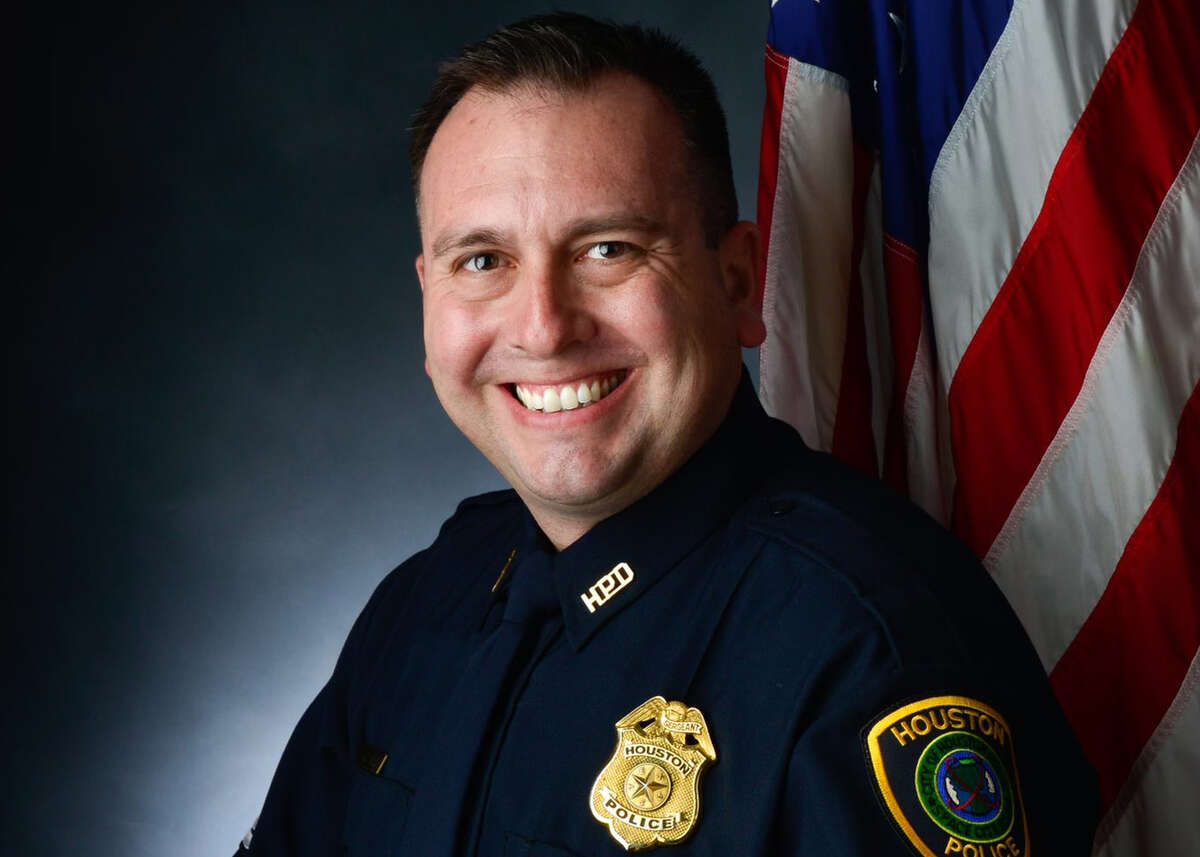 At the time of Sean Rios’ death, the Houston Police Department sergeant was wearing his police pants, shoes — and a Hawaiian shirt. He left his uniform shirt and badge in the car as he gave chase to an armed man, prosecutors said.

A gun battle erupted on that November 2020 afternoon and by the end, Rios died in a motel lobby with authorities not knowing at first that he was one of their own, officers testified Tuesday during the start of a murder trial. His accused assailant, Robert Soliz, fled and would not be arrested until later that week.

The defendant’s lawyers have characterized the sergeant as the instigator in the shooting.

“Sean Rios was not a peace officer that day,” lawyer Wade Smith said Tuesday during the start of the trial in the 179th District Court, highlighting that first responders had no clue that Rios was a law enforcement official as they responded to the shooting.

“He made no calls to 911 or dispatch, didn’t identify himself as he got out of the car or marched up to Robert — not even in the hotel lobby when he’s asking for help,” Smith continued. “We all know that if there’s one thing that would have gotten help that much faster, it was: ‘Help me, I’m a police officer.’”

The sergeant’s phone was found next to his car — where Rios likely dropped it during the chaotic clash.

Prosecutor Kathryn Rogers offered no motive and little explanation as to what prompted the fatal encounter but outlined Rios and Soliz’s movements on the highway during her opening remarks and suggested that a witness may have later helped Soliz escape the shooting.

Soliz, driving what Rogers said was a custom painted vehicle, cut over several lanes of traffic and exited Interstate 45 with the sergeant tailing him. Rios came to a stop in the middle of Stuebner Airline Road and abandoned his vehicle with the engine running. Witnesses spotted Rios chasing after Soliz.

Judge Ana Martinez noted during jury selection that the trial is expected to last two weeks. Rios’ widow, his daughter and parents and a handful of police officers in suits waited in the audience as opening arguments were set to begin. Soliz’s father and other members of the defendant’s family also watched.

Rios, 47, served with the police department for 24 years, with his final assignment at Bush Intercontinental Airport. He was headed to a 2 p.m. shift at the airport when he was killed during the shooting along the Interstate 45 feeder road.

Former police chief Art Acevedo said in the months that followed that he believes the sergeant — who was driving his personal car and was not wearing a uniform — likely confronted Soliz following a road rage incident, though no video or witness statements have been publicly shared to corroborate that narrative.

Soliz’s lawyers have argued that Rios may have failed to identify himself as law enforcement to the defendant.

Prosecutors played surveillance footage for the jurors that showed Rios, wounded and drenched in blood, staggering into the Taj Inn & Suites lobby. The sergeant encountered motel manager Sid Gandhi, who was in his office with a glass pane separating him and the mortally wounded officer. He could hear the last phrase that Rios likely uttered.

The sergeant leaned on the front counter and crumpled to the ground – repeatedly trying to get back up. He regained his footing one last time and collapsed. Gandhi remained on a 911 call as Rios laid motionless on the floor.

The manager testified that he did not hear Rios identify himself as a police officer or see visual clues that would indicate that he worked in law enforcement.

A police officer, Patrick Michon, told the court that the authorities first dispatched to the scene did not immediately recognize Rios as law enforcement but noted that his pants resembled their own tactical garments. More than a half hour passed before Michon peered inside Rios’ car and spotted the uniform — with an HPD badge and sergeant ranking — hanging in the back seat, he testified.

The defense attempted early in the case to have Rios’ profession excluded from trial evidence, citing the uncertainty that Rios identified himself and adding that potentially embarrassing information from an Internal Affairs investigation could be made public.

While arguing the relevance of the investigation, lawyer Clay Conrad noted on Friday that “novelty items” were found in the trunk of Rios’ car and that he was coming from lunch with another officer. That officer was also involved in the investigation and the two were ordered not to discuss the probe with each other, according to the defense.

The judge repeatedly used white noise Tuesday to mask bench conversations. On most of the occasion, a jury was not present.

When asked about her practice, Martinez — through a bailiff — said she had “no response.”

A failed attempt last week to pick a jury preceded the trial, with defense lawyers then saying that the prospective jurors in the pool were too biased. Several jurors outlined family ties to law enforcement officials or to victims of homicide. Attorneys selected a panel from a new pool of potential jurors on Monday..